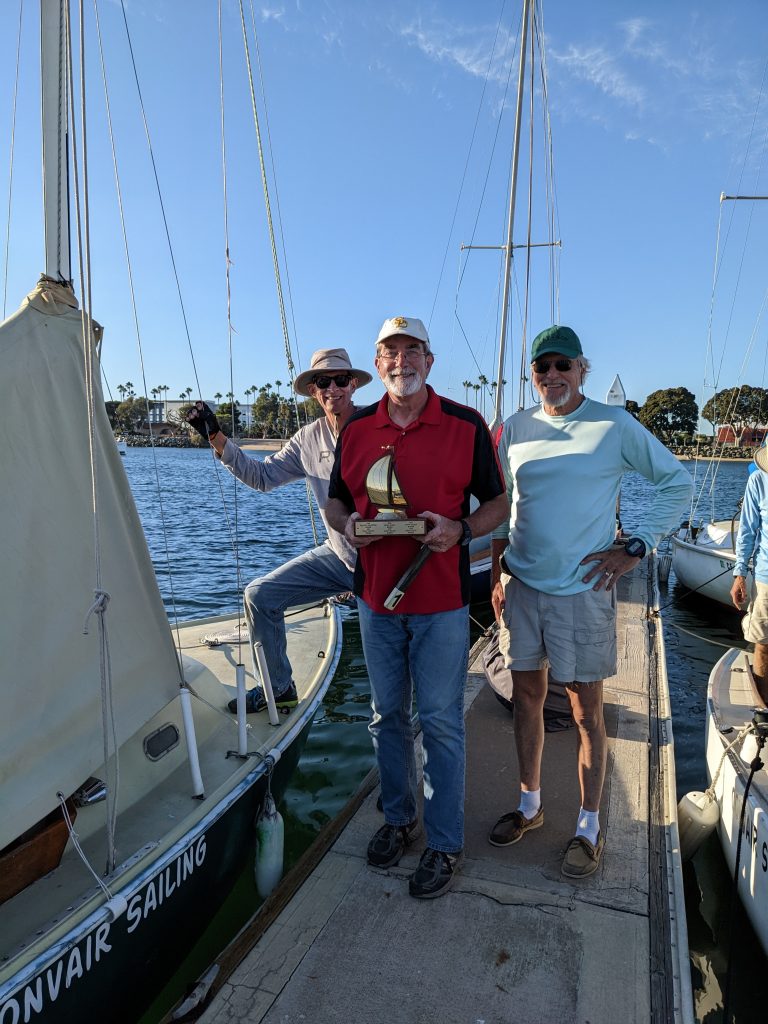 Congratulations! to Sandy and John for your Victory win!!

We had four Ensigns and four Victories.  Kim Carter sailed Victory 500 down from MBYC in time for the start.  David Velez and crew borrowed Victory 615, but used sail #641.  The Ensigns started first with the Victories starting several minutes later.  The breeze was from the WNW, and Tracy and Jeff set up a course with a heading of 280 degrees and about one mile between the weather and leeward marks.  They gave us course two, with a reaching lap sandwiched between two up and down laps.  The left end of the start line was favored a little, as is the custom with CSC/TPSC racing, and boats on port were able to cross ahead of starboard tack boats.  In the near-shore area of Coronado Roads, heading towards shore is generally favored, as the current seems to turn counter-clockwise and the wind appears to twist towards shore.  The wind shifted between WNW and NW throughout the race, with the velocity increasing whenever the shift went NW.

During the Ensign countdown, a sunbather on an inflatable something drifted down the course and arrived with about a minute to go.  There was yelling and gnashing of teeth, but nothing could be done and the countdown was re-started with the sunbather drifting towards Mexico.

The Ensigns started with 722 on port and crossing first over the three starboard boats.  Three headed towards shore and one, possibly 192, went seaward, but 192 reached the first weather mark with 722.  722 and 192 fought for four lead changes, but 722 eventually took the lead, heading towards shore on each upwind leg, making gains, and not losing on the downwind legs.  722 crossed the finish line about one minute ahead of 192.

For the Victory start, 632 and 641 started on port and both crossed first.  632 went up the center of the course.  648 went to the right, but tacked around 100 yards short of the lay line.  500 and 641 went all the way to the right side of the course and reached the weather mark ahead of the others.  500 and 641 battled it out neck and neck throughout the first lap and into the second.  On the second weather leg, 500 and 641 also sailed far to the right, but the wind had shifted to NW during the first weather leg and the two boats, apparently not being able to find the weather mark in all the background clutter, went well past the lay line.  648 spotted the mark and tacked earlier and the wind took her exactly to the mark without any further tacks.  500 had pulled ahead of 641 at this point, but was about 50 yards behind 648.  648 kept the lead around the reaching marks and through the final lap to the finish with 500 still about 50 yards behind.  632, meanwhile, had caught up and finished one second behind 641.

We also had one scare on Race Day.  Mid-race, several frantic phone calls from the club commodore and Coast Guard to the Race Committee.  Seemingly, there was a SOS sent out by one of our racers and picked up by the Coast Guard!  Thanks to a few of us having VHF radios, we soon discovered that the SOS boat in question was indeed fine, and a hard tack had inadvertently pressed the buttons on the iPhone, thus initiating the SOS alert.  We contacted the Coast Guard and thanked them for being ready to help.

Thanks to Tracy Williams and Jeff Nelson for giving up a chance to race and serving as RC instead. 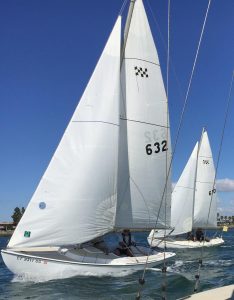 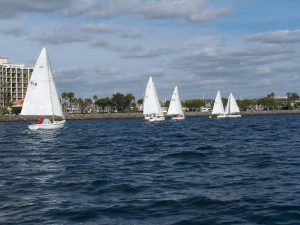 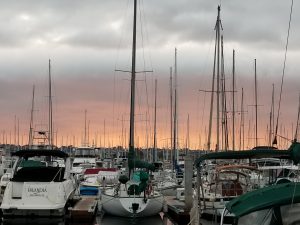